Catégories : #The War Against the Kurds, #Turkey in the 90's, #Turkish media, #Turkish nationalism

This article is the second part o “The War Against the Kurds – The Village Guards” (https://susam-sokak-in-english.over-blog.com/2021/03/korucu.html)

So unclear is the legal frame of these amateur units that an allegedly “popular” self-defense unit can easily shift towards a paramilitary organization, at the margins of the militias controlled either by political, tribal, or even mafia leaders. Often, the amateurism, which seems to be a feature of the above-mentioned scenes, hides the professionalism of true killers, which is not framed within any military supervision. Anyway, we know well that, even in a military frame, outbursts of uncontrolled violence are not uncommon.

Among other worrying photographs, let us mention a cliché published in the daily Sabah on October 16, 1996. The article announces “special units” of korucu to be created in the surrounds of the city of Van. The journalist doesn't explicit the legal status of these men who in fact, by their outfit and their facies, look like members of highly trained members of the “special teams” (özel tim). The photograph shows at what point the – very vague – legal dispositions have been diverted. The man at the forefront, photographed full-length, seems to be a tough one, with his assault rifle, his cartridge belts crossed on the chest, and, above all, with his severe face and his horseshoe mustaches, in vogue among the fascist Grey Wolves. With a talkie-walkie in his pocket, slightly wrinkled eyes, wearing a battledress and a beret, he undoubtedly is the chief of the men lined up behind him, all wearing mustaches. On their disparate dresses, neither visible stripes nor any sign of belonging to a military unit. According to the caption, which, again, doesn't keep any distance, “they have sworn to exterminate the PKK”.

Thus, the state made a step further with the institution of those numerous, well-trained and armed paramilitary troops, which actually are killer troops. One cannot believe a unit like the famous Şimşek's (“the Lightning”) to have been created for the mere protection of villagers. It has been constituted by a businessman, Saban Kahraman (whose family name means “the hero”), at the end of 1996 with 200 men; two years later its strength was about 800 men (Milliyet, November 13, 1998). Clearly, this militia was organized for combat, not for protection. Its men were provided by two Kurdish Alevi tribes, the Özbek and the Alan, both originated in Güdeç, near Tunceli (Dersim). According to Kahraman, interviewed in 2009 by the daily Radikal, the Şimşek unit would have been involved in 45 military operations (Radikal, May 10, 2009). In the photograph published by Milliyet, November 1998, about thirty men of the Şimşek unit are lined, standing "at ease" with the weapon at their feet, in military fatigues. Most of them wear a cap, some have a cartridge belt crossed on their chest, and all wear mustaches in the manner of the Grey Wolves. Some of them smile and seem joking together, but the men on the left of the picture seem to be anxiously awaiting the arrival of authority: obviously, they are standing there for a review. A rather young civilian, wearing a blazer and a tie, stands one step forward. He has a smile under thick mustaches and seems proud of his men: it's Saban Kahraman, their chief.

But in fact, Milliyet presents two pictures, a 'before' and an 'after'. Under the photograph of the warriors, another one displays a very different scene: a dozen coffins, in line and covered with the Turkish flag, lie amidst crying men. In November 1998, in the surrounds of Çatak, south of the lake of Van, the Şimşek militia was severely impacted during a clash with the PKK fighters. Fourteen militiamen were killed there. And, according to Milliyet, their companions' revenge was terrible: the forthcoming operation, carried out jointly with the army, reportedly ended with the death of 48 fighters of the PKK.

After such operations, the following can possibly be endless, as shown, on May 21, 1999, with an attack operated by a group of 13 PKK fighters against the house of the Şimşek's boss, right in the center of the city of Van. The clash has lasted thirty minutes. One of Kahraman's bodyguards, a korucu, was killed and another seriously wounded. 'The PKK will not get us with this type of attack', Kahraman declared after the clash. 'We will continue our fight. In Van, the PKK is feeling cramped now, they want to attack my family to annihilate us, but my guards prevented them from doing so; there were 20 people in the house at the time of the attack. The PKK will pay it dearly' (Hürriyet, May 23, 1999). Hürriyet reminds us that the Şimşek militia is credited with the death of 250 'terrorists', but has lost 18 'martyrs'.

Quite obviously, after years of war, intense training, and frequent fights in the mountains, these paramilitary units became semi-professional commandos. But their emoluments are low, and what a poor peasant may appreciate as an appreciable complement income, is perceived as a charity when, after years, he became a well-trained militiaman. But warfare does offer means of enrichment like robbery, exactions, confiscations, trafficking, resale of weapons, confiscation, and resale of land abandoned by fleeing villagers. In her book about the korucu system, Berivan Tapan draws up an impressive list - of course incomplete – of their violence and exactions. Profit, besides, was not their unique motivation, as they largely committed abduction of young women, and rape (Tapan, 2007: 139-148). It is sad to say that, twelve years before Tapan's book, the parliamentary report about extrajudicial executions already pointed out similar acts of violence.

It has led to the militarization and brutalization of Turkish society as a whole. The guards are everywhere and are used for any purpose. They feel invested in duty, and consider their function and acts as legitimate and vital for the nation's security. They are proud and take advantageous poses. They are soldiers without uniforms, but their outfit gets standardized: military fatigues, cap, mustaches, which makes them look like the members of the “special teams”. Together with the latter, they form an unofficial army, having at hand hundreds of tightly controlled and manipulated killers: the "repentants" (itirafçı), members of the PKK captured, returned and used for dirty work like extra-judicial executions (Zeki Ayik, Turkish Daily News, January 17, 1997).

The perception by the public of these more or less organized units is rather foggy, at the point that the official discourse and the media use the formulation “the security forces”, instead of “the army” or “the gendarmerie”. It designates any armed force serving the state. For example, during the national holiday at Diyabakır in 1996, the army and the police forces were considered as not sufficient for maintaining order; on a photograph published by Radikal, the music band marches in front of a hardly visible public. But the main topic of the image seems to be two men at the forefront, without any uniform nor signs of belonging, who brandish their assault rifle, with the finger on the trigger (Radikal, October 30, 1996). 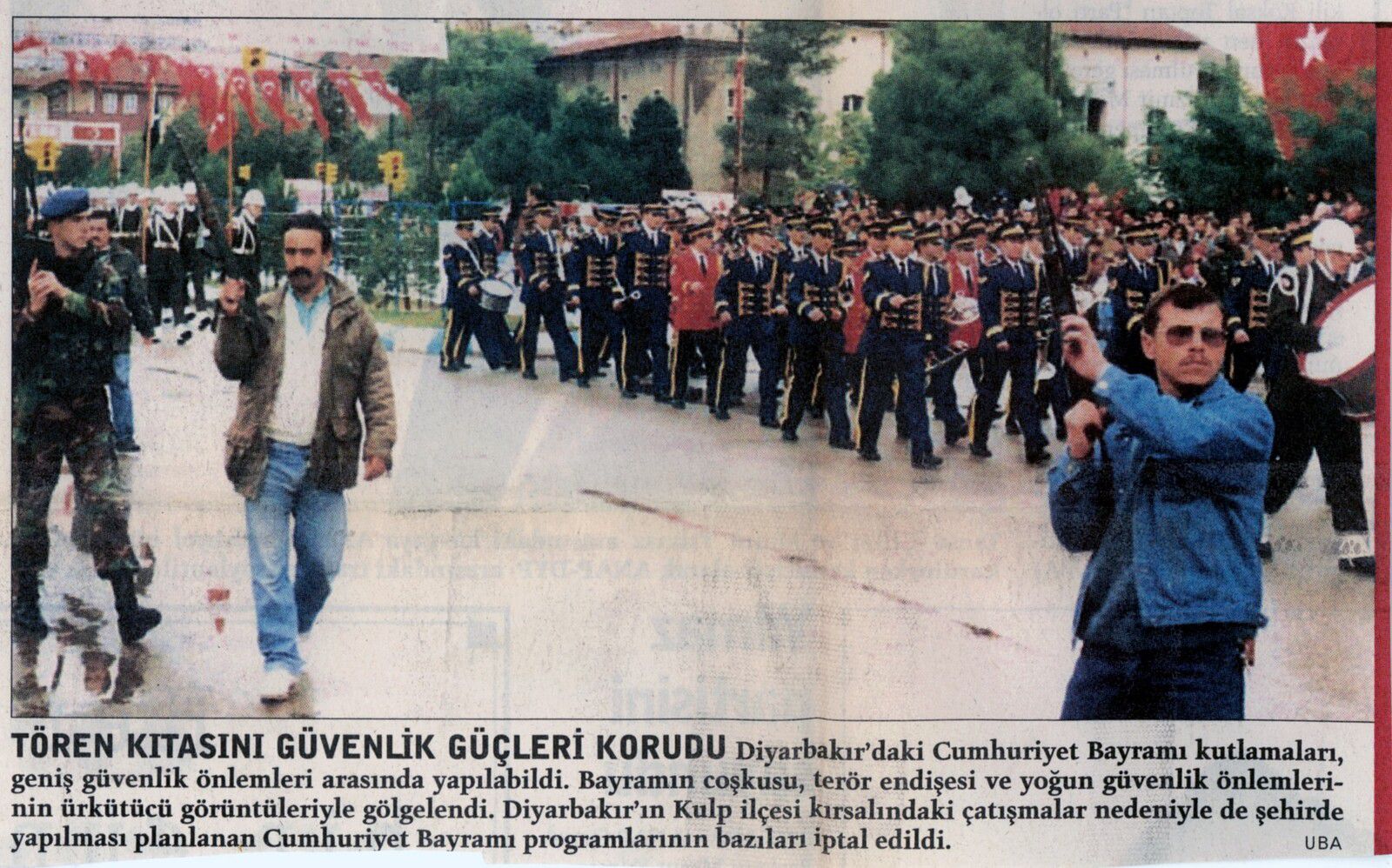 In January 1997, as an exceptional Ministerial Council was to be held in Agrı, easternmost of the country, again, men without uniform are mobilized for the reception and protection of the political figures. The militiamen are the main topic in a picture published in Milliyet, displaying three men armed with automatic rifles, one of them almost a teenager, flanking the prefect in front of the local airport. They hold their arms almost as required by the military regulation. At least to the eyes of the mainstream media, the korucu are entrusted with very official tasks; is it a message of support addressed to the institution of the village guards? The korucu have their place at the heart of the state, but they actually protect any power, above all, perhaps, the tribal chiefs. The daily Sabah mocks a very poor agha, whose “palace” is a single-story house – like any house of the village – but he is protected “like a Prime Minister” by three guards posing as so many Rambo's in the photograph. More impressive is the close protection of the famous Bucak family in Siverek, whose members let the press photographers operate in their quarters in 1997. They are so numerous that a part of them are grouped on two rows, on the ground floor, and another group poses in the staircase and along the first-floor gallery. It's an amazing picture shot in wide-angle, made of portraits of tough guys or fake war-mongers, some of them being very young. For the photo session, some have chosen western-like postures, others present arms like in the regiment, and others pretend to aim at a fictitious assailant. Their outfits are disparate, but many wear a keffiyeh, making them real movie characters, and all have weapons that are not toys. The fact that local caids and their guards accept to expose themselves, in this way, in a national media is significant: those who have the power and are protected with quasi gangsters, and those who hold the guns themselves, feel perfectly legitimate (Yeni Yüzyıl, November 13, 1996). When, in June 1997, the 'Refahyol' Islamist government was replaced by a centre-right/centre-left coalition ('Anasol'), commentators in the daily press began to raise a possible end to the state of emergency (OHAL) and to the 'village guards' system. Anyway, the 1995 parliamentary report on unsolved murders already called for its abolition. But how to get out of it, asked columnist Rezzak Oral (Milliyet, September 16-18, 1997)? The violence and extortion committed by the protectors had aroused strong animosity among the population. Replying to a written question of an MP, Meral Aksener, the Minister of the Interior, had herself admitted that more than 22,000 weapons of "undetermined origin" had been distributed (Radikal, March 14, 1997). But surprisingly, it didn't exist any inventory of distributed weapons whatsoever. Presumably, a large proportion of these weapons would never be returned to the state.

With their combat experience, the protectors could very well continue their existence as spadassins by selling their services to tribal leaders and mafia networks. There was no alternative acceptable by the whole of the political leaders. It was even feared that if OHAL was abolished, an unofficial state of emergency would be established, which would not even be controlled. In the summer of 1997, the number of state-paid protectors amounted to 45,000. According to Milliyet, half of them were involved in common law cases and were in trouble with the law; 296 of them had already been charged with murder, and dozens more with kidnapping, arms or drug trafficking... Even more serious from the point of view of the state, thousands of protectors were playing a double-game with the "terrorist organization", or had joined its ranks, with their weapon (Radikal, July 27, 2006).

Twelve years later, in 2009, nothing had been solved. Worse, the government was still recruiting 10,000 protectors (Vardar, 2014), and in May of that year, a tragedy shocked the country: during an attack on a wedding party in the Çelebi tribe, in the village of Bilge (Mardin), by heavily armed men, 44 people, including 17 women and 6 children, were killed. It was proved that the attackers' weapons had been attributed by the state to 'village guards'. The tragedy reopened the debate on the korucu system, but in vain.

Thus, merely by adding a few sentences to a law that had almost fallen into disuse, the government of Turgut Özal and of all those who succeeded him, whatever their political trend, transformed Turkish society by infusing it with paramilitaries, whose status remains unclear and whose number uncertain. During the nineties, and particularly because of the multiplication of extra-judicial executions and the Susurluk scandal, this measure was at least as controversial as the creation of the "special teams", and turned out to be very dangerous for Turkish society, and will certainly have profound and long-lasting consequences.

1997, September 23, Cumhuriyet: Interview of the Prefect of the Ordu province, by Isık Kansu and Erdogan Erisen. 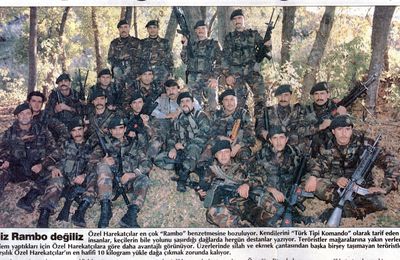 The War Against the Kurds – The “Special Forces” (1)